AUSTRALIA appears to be striking out on its own path in the plant-based protein landscape by value-adding crops it already grows, and not going down the path of the equivalent North American industry with its soy focus.

That was one of the messages from Bühler AG business development manager Molly Coleman in her presentation entitled Bean to Burger: The plant-based protein landscape.

Delivered at the Poultry Information Exchange and Australasian Milling Conference, or PIX/AMC 2022, event at the Gold Coast this week, Ms Coleman said the establishing industry initially looked like it would employ learnings from the Canadian and US markets.

“What I’ve noticed, which is really cool, is that our industry has said: “We just don’t want to be plant-based and copy the ideas from elsewhere; we want to create our own products from what’s here.

“We’re not just going to bring over soy and churn that out; we’re going to work out what actually grows well here and how can we make it circular.” 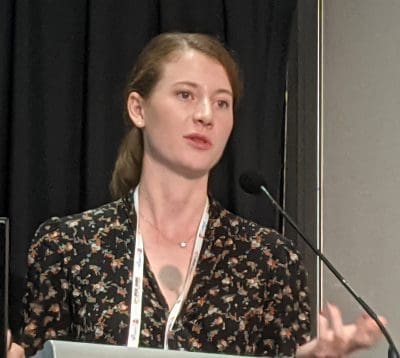 She said food miles in the supply chain for plant-based protein were also a factor.

“In the sustainability piece, which is important to the consumer, they don’t want to see a burger 100-per-cent made of soy that’s travelled on a ship, and already touched down in three different countries before it makes it to their plate.”

Ms Coleman said initially it looked like Australia would take its lead on plant-protein manufacturing from trends in Canada and the US, but was showing signs early in the piece of going the other way.

“I’m seeing a lot of learnings pour out of Australia into the other markets now because we are innovating a little bit.”

Addressing delegates from the stockfeed milling, poultry, pork and affiliated sectors, Ms Coleman said that while the plant-based protein industry is focused on human-consumption markets, its byproducts will have potential for makers of stockfeed feed and pet food.

They include hulls from first-stage processing, and starch from further processing.

“There will be a lot of tonnes heading your way.”

Buhler AG is a global leader in milling and food-processing equipment and die-casting, and while Ms Coleman did not divulge which companies it is dealing with in the plant-based protein space, she said the level of interest from potential investors was high.

“Venture capitalists come to us looking for people to invest in, so I don’t think there’s much trouble in commercialisation.”

“The actual trouble is in scaling up, because it takes too long for the speed they want to go at.”

Ms Coleman said growth in the protein sector globally was expected to be huge in coming decades, with Asia’s meat and seafood consumption forecast to rise 78 per cent by 2050, and increased demand from China alone for poultry one of the drivers.

“We know that market’s growing and the companies here that are forming, they’re not growing with our market, they’re growing with the Asian supply market, and export.”

She quoted figures from the UK’s Barclays, among the most conservative around, which said the global alternative meat market will grow from 1pc of the meat market share in 2019 to 10pc by 2029.

“Even if the market’s 1pc…that is still a huge amount of money in this industry.”

She said growth was already occurring.

“It’s somewhere between linear and exponential, and it seems to be following the path of different tech trends.” She said flexitarians, some of whom were making dietary choices based on hereditary health as well as environmental concerns, where driving the change.

“It’s not vegans that are growing this — that is such a small proportion of our population — it is people who want choice.”

She said investors in the plant-based protein industries included those that were big in animal protein.

“All the meat companies that are large enough in size to see it are pretty much involved in it; if they’re not involved, they’re very, very closely watching it because it’s their market.

“People are pouring money into this, and the reason why is because it’s high R&D; it’s very attractive to investors because they can see a path forward and they can see that it’s going to end up being viable at whatever size.

As Australia’s industry for manufacturing plant-based protein develops, Ms Coleman said it will not be without the hiccups that come as technology is developed and adapted.

“A lot of these companies are start-ups.

“We have some machines we can just take off shelf, but we then need to apply that equipment and that’s really difficult and that takes a lot of time.

“That means we’re going to have these blips…but they are learning and iterating from these very very fast.”

Ms Coleman stepped through the process of turning pulses into isolates, which starts with dehulling and milling the pulse into flour, followed by a dry fractionation process.

Dry fractionation produces fibre and starch-rich fractions to go into bakery items, noodles and pasta, as well as aquafeed and pet food, and protein concentrates.

Concentrates are the basis of meat alternatives, and Ms Coleman said the quality of the pulse used was paramount.

“The protein needs to be really good, and it needs to have the ability to develop those shapes and forms, and what we are finding is that every week, every month, some new kid on the block, some new protein comes to the fore and people say:  ‘I’ve got this amazing protein; it’s going to save the world’.

“If it can’t form into an analog, if it can’t take on that structure, then you’ve got to look at a different forming method.

“To get that taste, the texture, and that sensory attribute, that’s what’s most important; people will steer way clear of it if it doesn’t meet those requirements.”

“What we are looking at is protein functionality; does it fibrate well, does it taste good, does it have off notes, does it give colour?”

If wet isolation follows dry fractionation, the product is used to make beverages and dairy alternatives.

“Plant-based dairy is the area where it’s growing.”

“I realised this had become mainstream when Dad started drinking almond cappuccinos.

“That was about six months ago, and I thought: ‘This has hit the ground’.”

EDITOR’S NOTE: As reported in the May 2020 edition of People on the Move, Ms Coleman was the winner of the 2020 Australian Technical Millers’ Association Young Achiever Award.

Soybeans and processing in Australia